Sadly, some couples find their lives too difficult to continue living, for a variety of reasons. This phenomenon of the suicide pact is not new. The couple below were engaged to be married yet decided to commit suicide by strychnine ingestion:

Suicide pacts are not just for the young. The following older couple decided to commit suicide together because of financial difficulties and ailing health.

Probably the most tragic are the murder-suicide incidents. This young man felt that he would never be enough to marry the girl he loved and was so distraught that he felt that the only solution was to kill her and then himself.

Sometimes love is so strong and so mind-bending that logical and clear thought seems to escape some. Of course we can’t know for sure what was going on for these couples but their love tied them together even to death.

I don’t know about you, but it seems like there are a lot of couples who die very closely together. It could be coincidence, it could be they were both equally unhealthy at the end, it could be just my romantic notion that sometimes people are just so in love that they can’t live without each other. Who knows, but here is another example:

Samuel Cook Dimick moved to Wood County, Ohio from Lyme, New Hampshire in the 1870s. He married his wife, Mary Marshall in Lyme in 1860 and they spent the next 41 years building a life together. Their family only brought them 2 children, both sons, one who sadly died at age 19. Mary died at the end of April 1901. According to Samuel’s obituary he died just one week later: “He said that he had planned everything for his wife’s comfort and pleasure and now that she was gone he had no desire to live longer.”

“Marriage is not about age; it’s about finding the right person.” Sophia Bush
(Read more at BrainyQuote.)

There’s nothing that says “love” like going to look for a good wife. There must have been a shortage of “good women” in North Dakota in 1878. Well, it wasn’t a state yet, but part of the Dakota Territory in 1878. Statehood for North Dakota occurred in 1889. The population was sparse (and continues to be) for the area. And I imagine there really was a lack of “good women.”
In the 1880 Dakota Territory census, Phillip W. Lewis is listed with his wife, Mary, and their son, John (age 1). And where are Phillip and Mary from? Virginia. I think Phillip found his good woman. 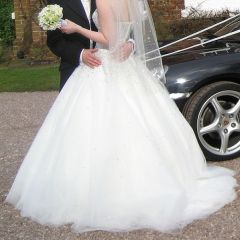 They are the reason we are here. A man and a woman came together and made babies and from that day forward genealogists everywhere have been having a hey day putting the long forgotten family puzzles back together. Of course we all know that they didn’t have to be married for the baby to be made. However, some of my favorite obituaries concern couples who were married for a long time. I have also enjoyed finding newspaper clippings concerning marriages, finding love, courting, and the like. It makes the names and dates and the imaginings we all get about our ancestors a little more real, a little more fun, a little more like us.

This next series of posts will involve things having to with love, marriage, couples and unfortunately, the inevitable: death.